Bitcoin Bears BTFD- Will the Bulls Now Lead The Charge?

A report released by diar has revealed how the Bitcoin bears made the most of the 2018 bear market and accumulated at the low, and now the bulls are firmly in control to accelerate a bull market return.

Bitcoin whales stuck to the basics of buying low and are now controlling a more significant portion of the total supply of Bitcoin in circulation.

Bitcoin, at the time of writing, is currently valued just below $9,000. Such figures were last seen around August when Bitcoin was on a downward trend following its bull run in 2017. Traders experienced a bear market throughout 2018, ending the year with a Bitcoin valuation at $3,200. 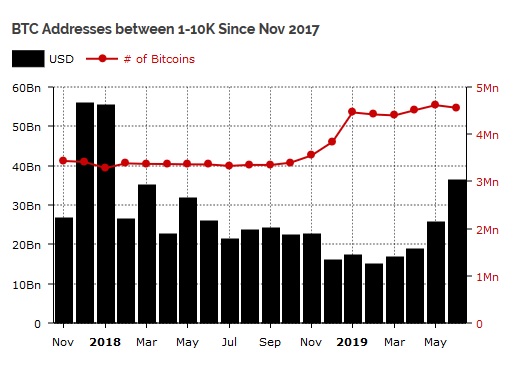 The number of addresses holding between 1000 and 10K Bitcoins each has seen a steep rise with a whopping accumulation of 450,000 Bitcoins in less than 9-months | Source: diar

With platforms such as Kitco predicting continuous losses into 2019 for Bitcoin, it was no surprise that many traders were abandoning the cryptocurrency. Bitcoin whales took this opportunity to buy while the prices were favorable. Their investment is turning out to be worthwhile currently.

Around Dec 2018, Bitcoin whales, those with over 1,000 accounted for less than 20% of the total supply of Bitcoin. Following the low prices in Dec and the purchasing that ensued, the holders of between 1,000 and 10,000 Bitcoins have increased their market share, controlling 26% of the total supply of Bitcoin, a 6% increase in less than six months!

Together with the stacking whales were individual investors who also stuck to the basics of any form of trading. 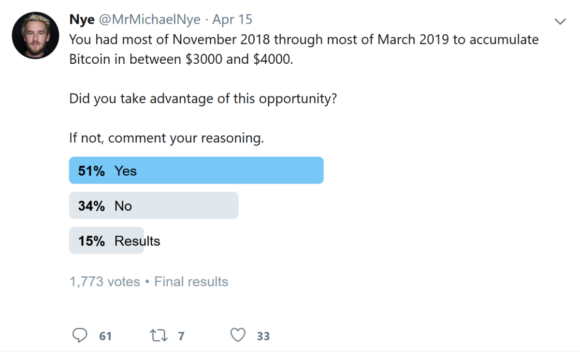 According to the poll, it seems most crypto enthusiasts made the most of the dip | Source: Twitter

Further, the whales bought even more Bitcoin while the bear market was ongoing. Most of the minted Bitcoin used as a reward for miners was bought up by whales, which further strengthened their control of the market.

Now, Bitcoin is soaring, and the whales seemingly have the last laugh.

There are close to 1,000 retail outlets that are accepting Bitcoin as a form of payment. This number is set to continue growing as more establishments embrace cryptocurrencies.

The number of Bitcoins held by retail stores has also increased significantly as more people trade through the currency.  Spending via Bitcoin is increasingly becoming popular and is likely part of the reason why the value of Bitcoin is on the upward trend.

If spending via Bitcoin increases, more retail outlets will end up holding more Bitcoin, which will increase the amount of held by “large accounts.”

Steroids for the Bull Market

With fewer accounts increasingly holding more Bitcoin, the bull run is set to continue actively. Considering factors such as the upcoming halving, Bitcoin is arguably at its most important position yet. The demand for Bitcoin is likely to soar as other account holders try to secure their desired share of Bitcoin.

A lot has changed since Bitcoin’s 2017 bull run; the fundmaentals are in much superior shape. Compared to 2017, it is now a lot cheaper and faster to transact using Bitcoin. The drawbacks of Bitcoin have been dealt with over the two years, leaving the platform running Bitcoin better than ever.

Furthermore, compared to 2017, when Bitcoin was at $8,000, Bitcoin currently accounts for 5% more market share. The number of transactions has increased, so has the number of wallets containing Bitcoin. The number of Bitcoin in circulation has also increased; thus, its current value in 2019 is stronger than the same value in 2017.