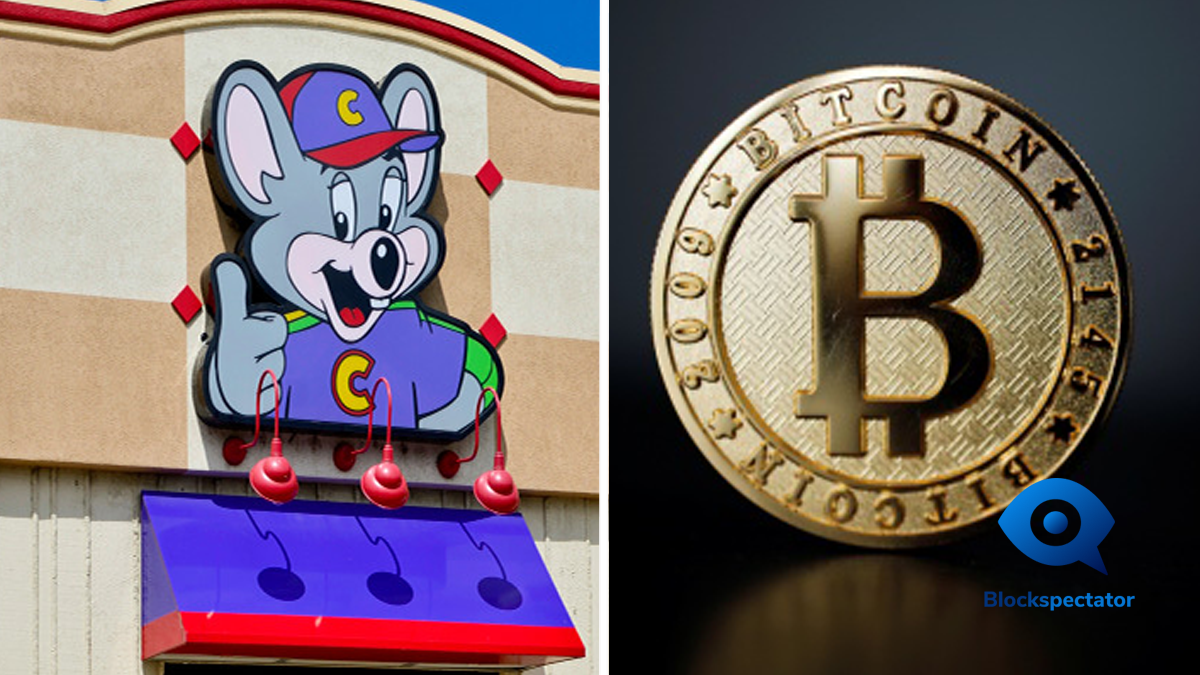 The internet is never short of light-hearted moments. A scroll down social media pages and one finds the most outrageous yet exciting topic being discussed. On the latest episode of internet drama, a Tweet by Ryan Hoover sent the public into a frenzy following the replies his post received. 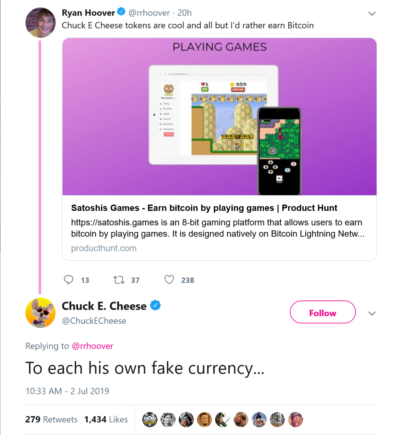 Chuck E. Cheese were sure to make their feelings known about Bitcoin | Source: Twitter

Known to spark controversy, Ryan Hoover uses his platform to keep his followers thinking. He previously sparked the debate on Bitcoin and gold as stores of value which received a massive response from his followers.

Would you rather own $100,000 in gold or bitcoin today?https://t.co/8ylo8j0fic by @saifedean and @soonaorlater

Well, at least from his antics, more people are made aware of BTC, blockchain, and the meaning of value.

Some users decided to pit the two “fake” currencies against each other to determine which one was more valuable than the other, a competition where neither would accept defeat or listen to the reasoning of the other. However, because it’s the internet and anything goes, the users had their way, leaving some hilarious comments for spectators.

Thinking logically, Chuck E. Cheese coins are exclusively meant for entertainment within their stores, whereas BTC can be used in multiple stores as a form of payment. However, it’s the internet, and sometimes, logic is put off so people can have a few laughs and give comments such as this:

A perfect conclusion to the discussion and probably the best burn on what the future has become.

By labeling their token and BTC as fake currencies, Chuck E. Cheese may have provoked a line of thought that most traders want to avoid. Is BTC worth anything? Can it be used as a store of value? Alternatively, will 10,000 BTC get you a box of pizza as it did a few years back?

You might be interested to know that the first Bitcoin purchase was for 2 pizzas, the price was 10,000 Bitcoin

Nevertheless, currencies have value, the value that we impose on them based on supply and demand. Currencies only have value because we want them to, once the demand is below supply, currency ceases to excite and becomes just another piece of paper or coin.

To some extent, Chuck E. Cheese was right about their currencies being “fake.” However, some value the “fake” currency, which is the reason why BTC is trading for thousands in US dollars.

At this point in history, when companies such as Chuck E. Cheese are commenting on Bitcoin, the crypto community should be gleeful. The crypto gospel is spreading. Even negative news will spark interest amongst the higher population.

Cryptocurrency is at the right place where more people deem cryptocurrencies such as Bitcoin, more valuable than even gold if such light-hearted moments lead to more knowledge about cryptocurrency then heck! May more controversies brew in the pot of mixtures known as the internet.