Peter Brandt: Despite The Dip, Bitcoin Still On Course For New Highs

Having maintained above $10,000 for most of Aug, Bitcoin experienced a slight dip below $10,000. The cryptocurrency is still slightly above the price it started Aug with. The decline comes during a week where even mainstream stock markets experienced worrying lows. However, Bitcoin remains stable in its path to new highs, as assessed by Peter Brandt. 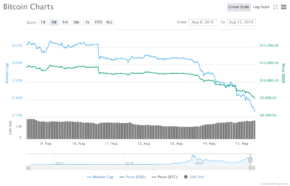 Markets require patience and understanding, as various factors are involved in price determination. Peter Brandt, on his Twitter account, gave hope to Bitcoin traders despite the dip the cryptocurrency experienced during the week.

From the graph, the MA (in orange) provides a more stable outlook of the performance of BTC over the years. By negating all the unnecessary noise seen on the usual trend, BTC may likely reach new highs shortly.

The assessment evoked much response, including some, which showed that the crypto community is also doing its own research on Bitcoin’s performance.

Another trader also shared their expected improvement in Bitcoin’s price over time.

Bitcoin’s price has been an issue of debate ever since it broke the $1,000 mark. Various analysts give their market assessment and, sometimes, these assessments and subsequent predictions come true.

Peter Brandt’s analysis is not the first to predict that Bitcoin is headed to new highs. A few weeks ago, Pantera CEO claimed that the cryptocurrency could hit highs of $356,000 in a few years. CNBC’s Joe Kern also gave a $55,000 price prediction by 2020.

All these points towards a new high that will likely surpass $20,000, a figure slightly above the Bitcoin high hit in 2017.

For many Bitcoin traders, this may be the best time to stock up, while the price is lower than expected. The dip is just a slight bump on the road as Bitcoin likely prepares for another record-breaking bull run.